Another big and exciting event happening this week. Association of Chess Player Cup, aka ACP Cup is in motion. The tournament will on show from the 13th of September to the 15th of September in Riga, Latvia. How exciting it will be when 16 very strong players come together and try to defeat each other in rapid time control. Karjakin, Gelfand, Radjabov and Leko were the past ACP Cup winner as well as Kosteniuk and Nana Dzagnidze.

Rather exciting fact, the pairing is determined with the newly invented FIDE Rapid rating. Thus the rating are being used to build a pairing tree, for its Knock Out format. Top rating players seeded to lower rating, but s by all mean still producing an exciting pairings. As the official website put in:
- The pairings will be made as follows: four highest-rated players will be randomly paired against the four lowest-rated players.
- Consequently the players ranked 5 – 8 will be paired with the players ranked 9-12.

Each round is two rapid games (25 min) with tie break of blitz games to follow. The first round just finished on the first day and qualifying another eight players to play in quarter final this Saturday night.

The on going ACP Cup 2013 result is put in this pairing tree: 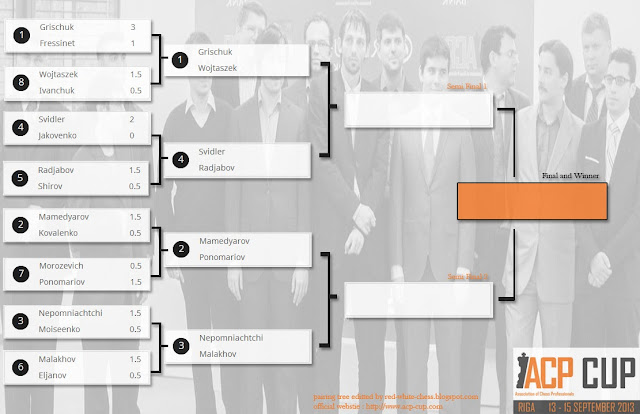 In this Pirc miniature, Jakovenko help Svidler activated his Queen by 16.bxc5, allowing black to launch nasty attack on kingside and won the tactical battle a few moves later. The only pairing that goes to tie break, here Laurent Fressinet utilized Scandinavian Defence on his must win blitz tie break round. The game went sharp but alas the position keep worsen for black and looks like black just lost on time. 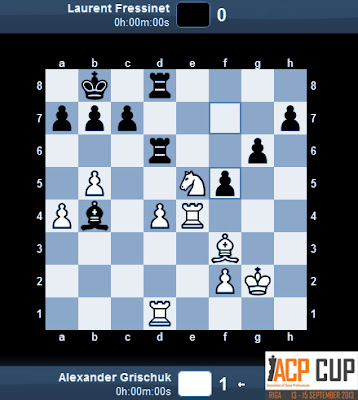 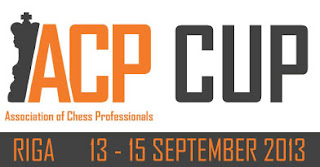 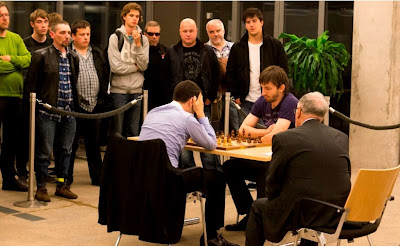