Somehow there is no demonstration or riot in Doha, Qatar. Well, unlike his Middle East of North African country who got new hobby in criticizing their king/president, in Qatar thing went normally and they even hosting a chess tournament. About a week after the start of 2011 Women FIDE Grand Prix in Doha, Armenian GM Elina Danielian is smiling wide for her five wins so far. Result from the last round, round 5, is as follow :

and this put the tentative standing like this:
1. Danielian, Elina 5

Can Danielian win this GP? As the main player in Women Chess is a bit narrow in selection, it will be a delight surprise. Hou Yifan is the overall GP leader but since she is the Woman Chess World Champion now
and the objective of this GP is to win a ticket against WC, then the second place is the main concern here. Currently Nana Dzagnidze is leading, Koneru and Xu Yuhua are also potential for being the runner up of overall GP, if they land first place in Doha. Official Doha website here. 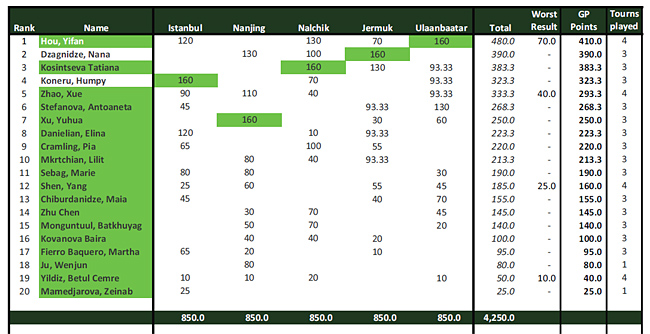 It is an ex Chess Queen that re-Queening in Young GM Women, Moscow. Seeing the last standing of this event :

Well, this time they are using a more proper timeline for the term "Young". Understandable, GM Hou Yifan age 16 is not qualified for underage ;p

And the "male" counterpart was taken place as well. This time it was Boris Grachev standing solely on top, ahead of many Young GM from the other world. That' right, again no underage chess wizards the like of Wesley So, Anish Giri, Caruana, Carlsen, or Nyzhnik. Not all Russian player arounds, GM Robert Hess from USA was participating, but so far he is seriously in trouble with the Sicilian Opening. Losing fours of white games to this opening, and this is one of them:


Lots of D,E,F category also taken place in Moscow, and results are here. After this Moscow is preparing for the more famous Aeroflot Open, where Gata Kamsky is top seeded.
at 3:06 PM No comments:

About a month ago I accidentally came across an interview of Hou Yifan in Chinese TV Channel. I tried to record but with device nearby me, it was only seconds can be recorded. The interview talked a lot about off-chess-topic such as her hobbies and childhood background.

I can understand small portion of it, since my mandarin is really on class room level, and Hou Yifan spoke with her native slang and dialect. Here some translation on this video:

When asked is playing chess give her anxiety or feeling always in rush, when she was on junior / primary school.....
Hou : "Not very so, I still able to do other thing , other relaxing activities"

Is her parents allowed her to watch television...
Hou : "I like watching cartoon. When I back from the school I do chess practicing, daily. After around 6 o'clock (not sure what time she went back from school) I can watch television, I watched when there is a cartoon..."

How about school lesson? Homeworks?
Hou : "It done after I watched tv, not very worry. The homeworks also not many. About in third year I move to "Jing Nan", I take the third and fourth year in Jing nan.

Around age 7, Hou won first place in Jiangsu province junior tournament. Defeating 11 male opponents out of 14.  To increase her chess skill, her father take her to Sandong.

Hou : "My parents went back earlier and I stayed in house of chess player friend for one week."

Were you feeling worried at that time? How old are you (at that time)?
Hou : "7 years old. I was worried, but my parents need to work. No choice."

So how did you spend your week there?
Hou : "Not very well, because I was too young I always called back home. Everyday trying to find excuses, like my shoe string broke, feeling not well etc. After a week my mother join me, and until now my mother always accompanied me, never leave me."

How can she do it? (as she need to work also)?
Hou : "Her job (also) have some travelling. The local goverment know my requirement (to travel) so that my mother can have some special permit to do it (so the mother most likely worked in goverment)."

When asked it is chess is "ancient" / oldies sport/games?

Hou : "Yes, it is an ancient stuff. (But) When we like something we will feel interesting to do it. Everyday we must practice, a lot of memorizing, something like from Monday to Friday around 4-5 hours. On weekend it can be shorter period. So not everyday our energy spend on chess"

About activities outside chess.....
Hou : "Reading a book, listening to music, and if there is a time, swimming.

When asked about her favorite book, Hou mentioned some book titles, unfortunately I have no idea on what book it is since they are titled in mandarin.

See captured videos, some waiting for translation, or please let me know if you can translated (and better than mine) :

Nigel Short finished the 2011 Tradewise Gibraltar Chess with a lot of wins, eight of them. But really it wasn't enough to win the tournament. Of all ten rounds Short sort of one point to the real tournament winner. He lost to Ivanchuck, which one point higher exactly taken from Nigel Short. Yes, that is Vasily Ivanchuck who didn't really roller coastering in this tournament, a 9/10 point, two draws only with GM Ruben Felgaer (ARG) and GM Victor Mikhalevski.

Nana Dzagnidze is highest woman with 7/9 followed by IM Melia Solome in same score but lesser tie break. Lots of woman playing here, and this is the pictures collection. Fabio Caruana is the highest in standing for youngest GM category, ahead of Richard Rapport and Ray Robson. Viktor Korchnoi is top suspected of highest standing in oldest GM as well. He lost the final round to GM Daniel Fridman, that's all.