I always keen to see some alternative chess tournament outside the 'conservative' style, as in FIDE Grand Prix Baku right now. The tournament I refereed to is Millionaire Chess 2014.  It's happening in Las Vegas 9-13 October 2014, organized by chess entrepreneurs Maurice Ashley and Amy Lee. The big news is the $100,000 first prize fund, and also the $1000 entry fee. In return, players will be spoiled with world class playing condition and chess fans enjoy properly done chess live coverage.

The main story that just concluded minutes ago is GM Wesley So wins this. He already granted as top seed from the start. Along Wesley were many top GMs, GM Le Quang Liem, Yu Yangyi, Bu Xiangzhi, Alexey Dreev, Varuzhan Akobian and Ray Robson and so on. Ray Robson himself earn much respect for his performance overall, ending up as 2nd place in the tournament.

The tournament is an open Swiss, but after the 'first phase' elimination, four players invited for Final Four, American knock out style format. Wesley So defeated Yu Yangyi, and Ray Robson knock off Zhao Jianchao. This result leads to 'friendly' match between ex-roomates Wesley So vs Ray Robson. Both attended Webster University and very close to each other. Zhao Jianchao vs Yu Yangyi is the same case, highly probably so.

In the first game, in rapid 25 minutes time, Ray pushed hard to Wesley, but the later manage to draw. The second game was probably the anti climax. Ray Robson playing black chosen the Gruenfeld Defense, but quickly 'surprised' by Wesley So's Qa4+, which the line Wesley So 'did not tell Ray about it'. In the nervous situation, Ray simply blundered a pawn in move 12. Wesley So push the game without much fight and received a resign handshake pretty quickly. Wesley So already knocking to live rating as #10th player. He is one place behind American number one  GM Hikaru Nakamura , at 4.5 points gap only. In the interview, Wesley So provoked by Arianne Caoli, which is Manila-born WFM, about his view to Hikaru, but Wesley remained low profile and said the distance between them still large.

In the U-2500 section, it is IM Ronald Burnett and FM Kazim Gulamali that fighting for the first prize of $40,000.   Outcome still unclear at the time of writting. 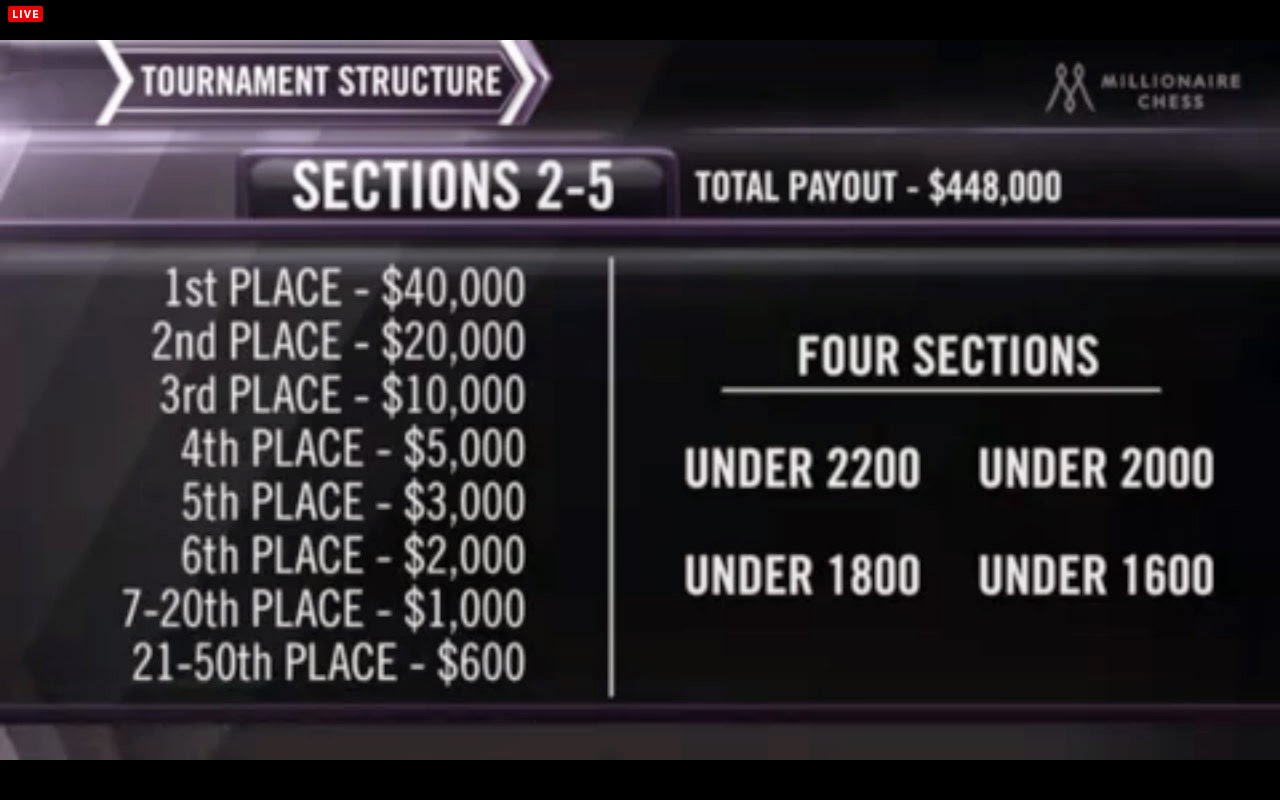 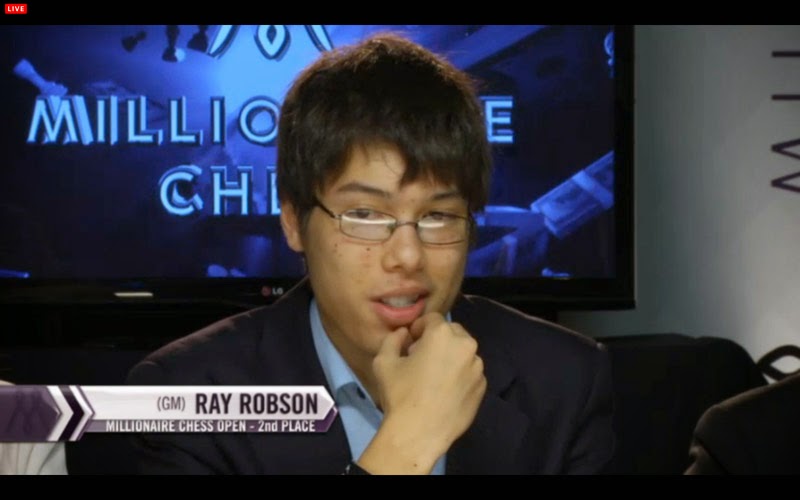 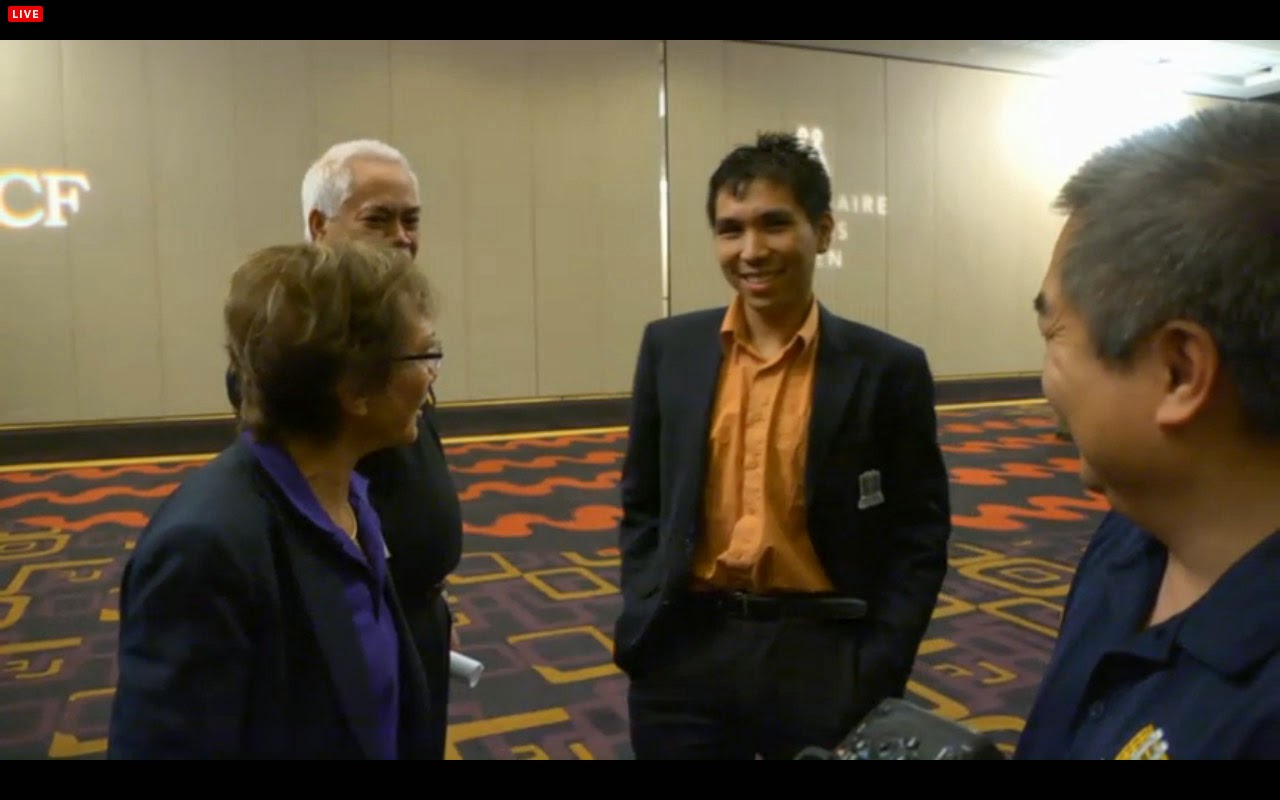 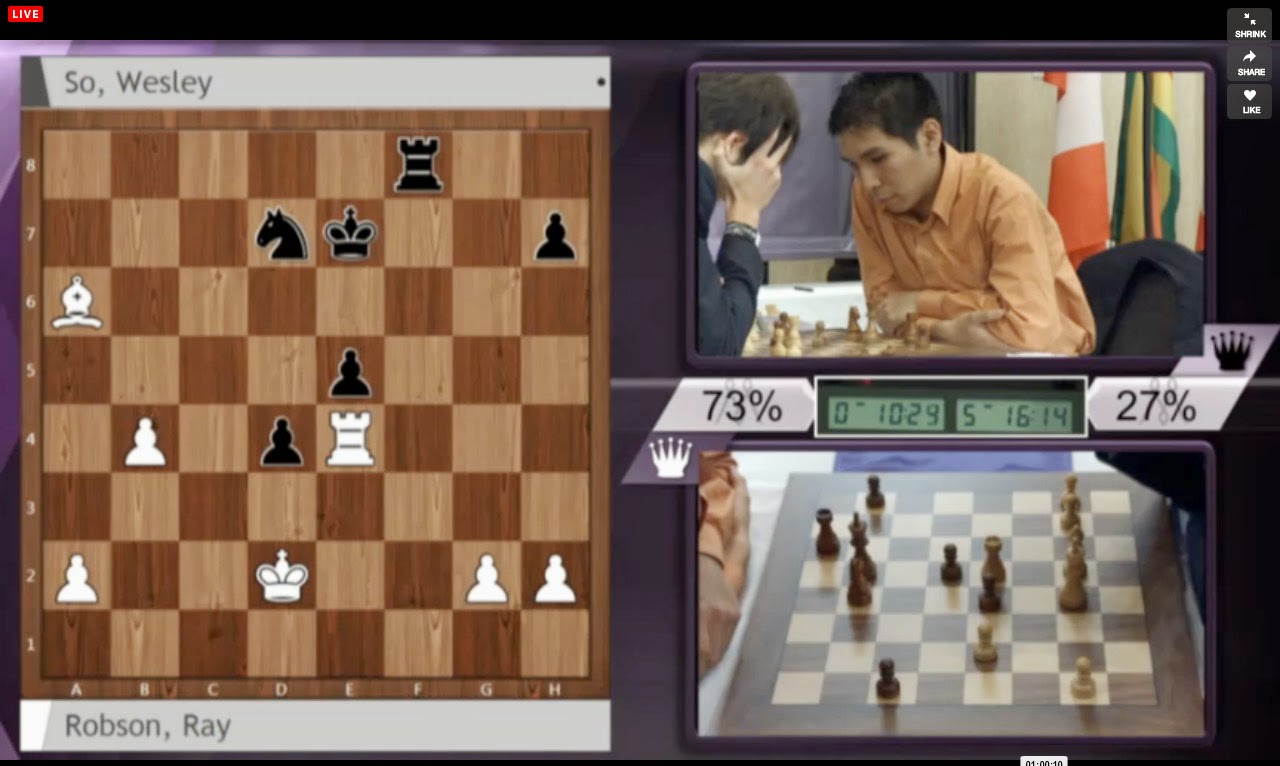 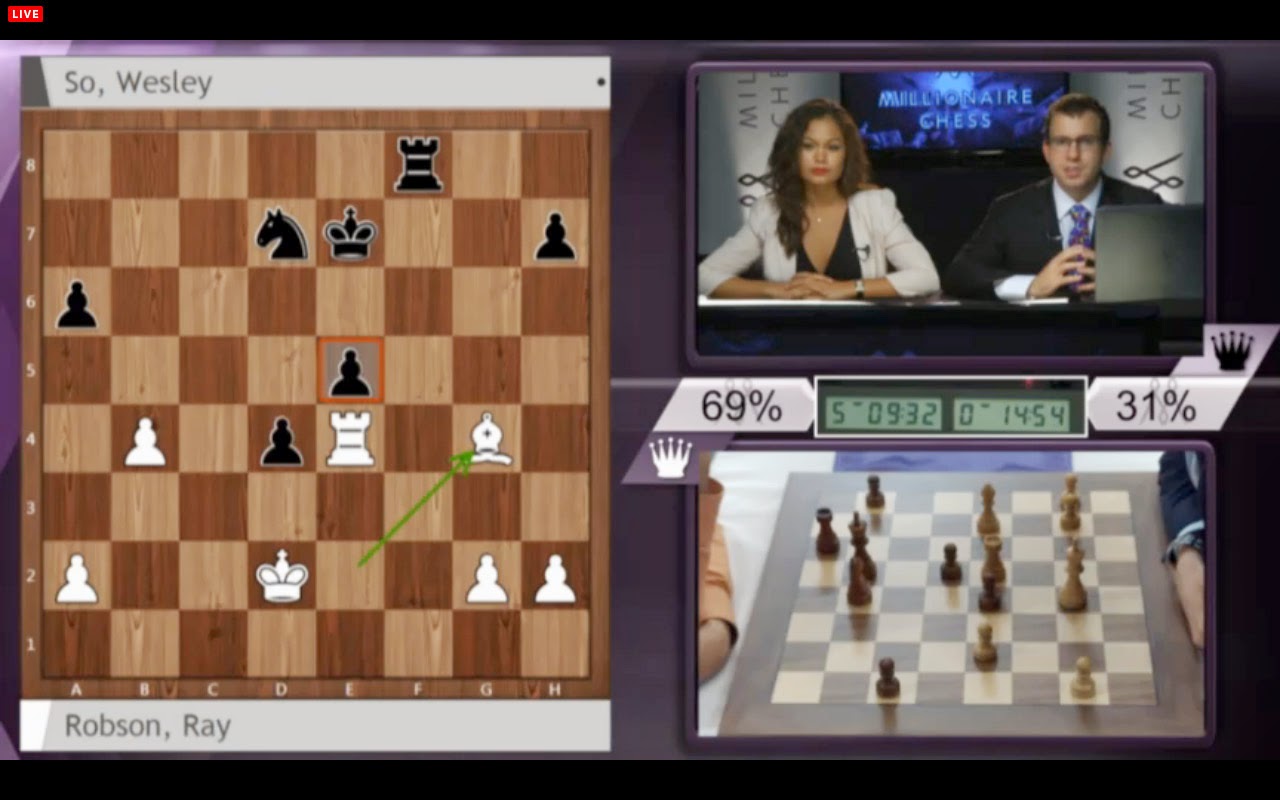 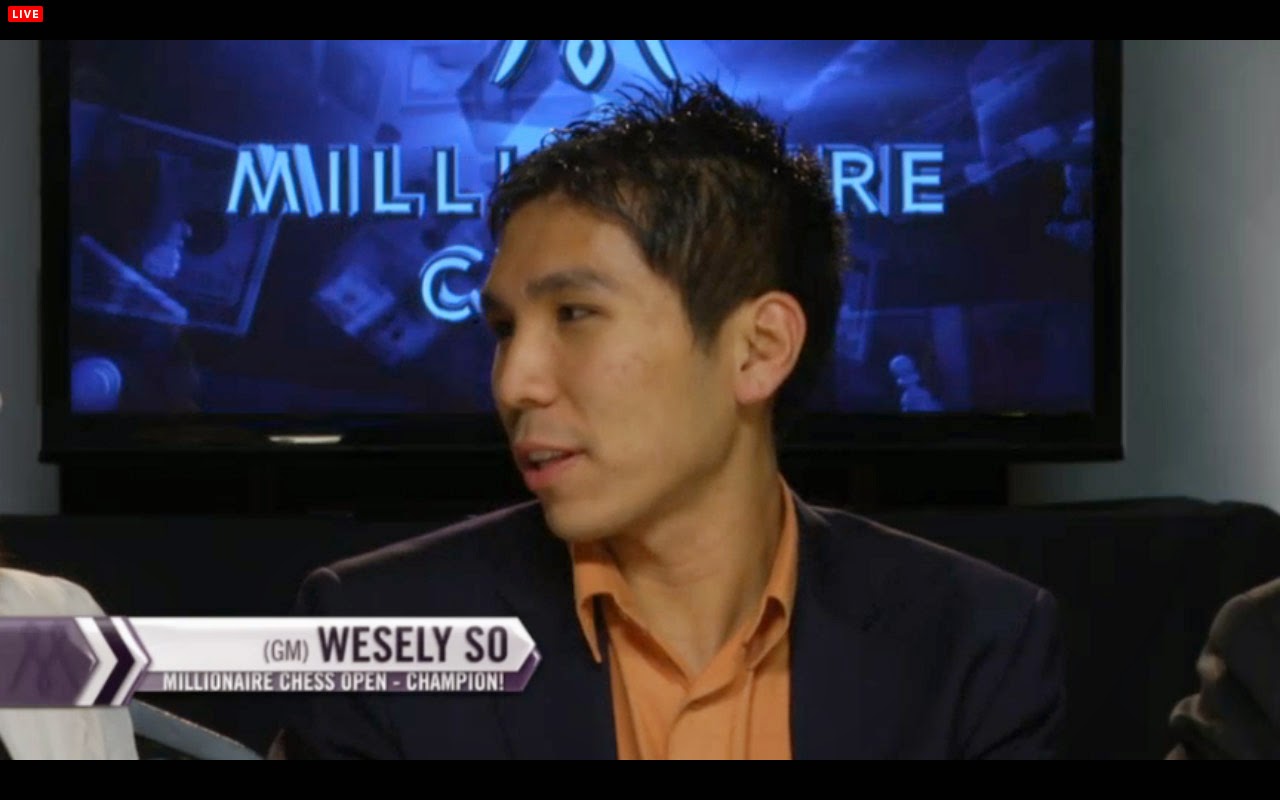 winner GM Wesley So ,
notice the typo on screen!

Millionaire chess, albeit being positive and bombastic nevertheless raise heated discussion among pro, GMs and elite GMs. In Chessbase , Alejandro Ramirez put in writing about his experiences. At first we learn more details about 'minor' complains but then he payback with other positive side of the tournament. GM Emil Sutovsky also open an openly thread in his Facebook account, which Maurice Ashley himself participating. As for online viewer and follower, we feel Millionaire Chess is truly revolutionized and expect very much it would happen again next year.